When COVID-19 first hit, Tali Haleua, founder of Fuelogistics from Salt Lake City, Utah, thought he could get by for a few weeks covering expenses out of pocket, but then the lockdowns dragged on. Eventually, he had to lay off all 10 of his employees. Now his trucks are sitting idle and he isn’t sure what comes next.

“Shippers were cutting their rate so low that it was less than what it cost us to drive our trucks,” said Haleua.

Trucking might seem like a potential winner in this crisis, given how much everyone is ordering from home these days. Amazon can barely keep up with orders as it notifies customers there might be delays in their shipments. But the reality is, shut-down manufacturing lines, stores and restaurants are cutting into shipments, making trucking a big loser.

More than half a million jobs in transportation and warehousing were lost in April. The unemployment rate for the sector rose to 13.5% for the same month, according to the Bureau of Labor Statistics. The industry began struggling in February, when factory shutdowns in China caused supply chain backups and eventually a drop in goods moving across the U.S. Then the lockdowns hit North America, causing the industry to take a second hit when businesses shut down and shipping demand dropped even further.

Although the impact was felt across the board, smaller transport operators were hit the hardest because they rely on spot-rates, which is a price offered by a shipper on-the-spot to move a load for a single shipment. The rates are volatile because they are based on market conditions, which can fluctuate over the course of a day. In contrast, larger carriers tend to secure contracts that have a fixed price and time.

When spot rates drop, transport operators are squeezed because they need to cover all expenses associated with delivery, including fuel surcharges, equipment, maintenance and even broker fees, making profit margins smaller.

As shipping prices continue to drop, small freight companies like Haleua’s are struggling to stay afloat. In April, truckload rates hit a 4-year low according to DAT Freight & Analytics, an online platform that provides market trends and data insights.

“Many have given up the equipment and veteran truckers are throwing in the towel and saying, I am done,” Haleua said. “You don’t get that back overnight.”

But while the obvious outcome would be a loss of jobs and revenue for carrier companies, there is also a risk to the broader economy. The long-term effect will be felt in the U.S. supply chain. Many operators and drivers may not be able to return to business-as-usual once the lockdowns end because equipment and vehicles that get repossessed or turned in, cannot be refinanced. The outcome could be serious shortages of carriers that can move products when the market is back in full swing.

Since flatbeds are typically used to move durable and capital goods such as building materials and farming equipment, CM Truckbeds is feeling the direct impact. The company has remained open as an essential service, but with the shutdown of other businesses, they are operating on a day-by-day basis, with no projection of what tomorrow’s demand will look like.

Overall, there is much less product moving across the country. Manufacturing lines have been halted, while purchases of vehicles, washing machines and even capital goods, have all been put on hold. As for the movement of food products by refrigerated truck beds or reefers, the shift from servicing restaurants with bulk loads to servicing grocery stores requiring single packaged food items happened so fast that it left suppliers and carriers scrambling to adjust.

The early stages of the pandemic were actually good for truckers — if they were in a position to take advantage of the scramble. March saw a spike in rates mainly because shippers couldn’t find enough trucks to reposition inventory quick enough. Larger contract carriers that could afford to shift gears, noticed the high rates and adjusted their equipment to take on the load. The shift mitigated some of the losses from falling volumes of manufactured goods. Unfortunately, many smaller carriers didn’t have the resources to adapt, and were left behind. 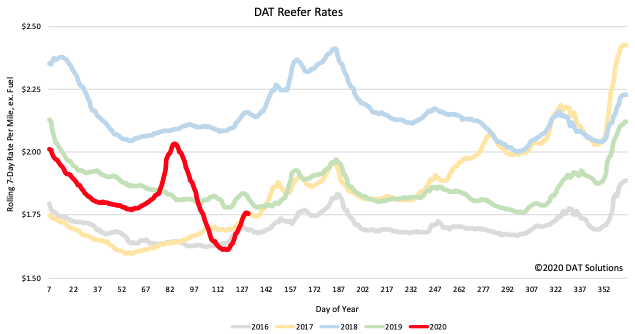 “It is not as easy for freight services to pivot on a dime when their normal delivery schedules have been tweaked,” Blashfield said. “This is a massive change in a very short amount of time.”

The coronavirus pandemic hit at a time when the trucking industry was already struggling because of an oversupply of commercial carriers. Higher rates in 2018 encouraged truck fleets to purchase new equipment. Class-8 truck sales, the largest on the road, hit a record high in 2018. While wages and bonuses were also increased to pull more drivers onto the road. Eventually, the oversupply along with the trade wars that took over most of 2019, led spot rates to begin their steady decline, until the pandemic hit and sealed the deal.

For Haleua, he has so far been able to keep his equipment even though the company is behind on two payments. They have been given until mid-June to catch up or come up with a payment plan. But even when the trucks are back on the road, the profit margins will likely not be significant enough to allow owners to catch up on missed payments anytime soon.

As the economy begins to reopen, manufacturers, restaurants and retailers will need to return to their normal shipping schedules and operating routes. When that happens, there might be a serious shortage of carriers.