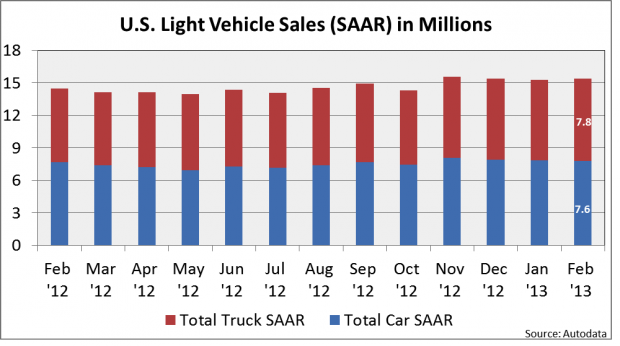 Light vehicle sales for February totaled to 1.2 million, an increase of 3.7 percent over the same time period last year, according to market researcher Autodata Corporation. Pent up demand by consumers, auto industry’s introduction of new car models and easy financing are driving this growth in the automobile industry.

“The numbers we have been seeing are generally consistent with an improving economy,” said Jim O’Sullivan, an economist at High Frequency Economics. “It suggests a decent momentum ahead of the sequester.”

Potential drags of “sequester” or mandatory federal spending cuts due to take effect on March 1, could not curb the consumer appetite to buy cars in February.

“We think most of America is getting a little tired of hearing about some of the dysfunction,” said Kurt McNeil, vice president of General Motors Co.’s U.S. Sales in a conference call. “We think the fundamentals are strong and that’s what’s important, and that’s what’s driving the economy.”

Despite the looming spending cuts, an improving housing market is boosting consumer confidence. As a result, the construction industry has been buying new trucks to replace the old ones. While Ford’s F-series trucks gained 15.3 percent from a year ago, G.M.’s pickup trucks – Chevrolet Silverado and GMC Sierra posted a 29 percent and 25 percent jump respectively.

“The turnaround in housing, not just in home sales and housing starts but also in home prices, is contributing to the improvement in the recovery broadly”, said O’Sullivan.

Rising gas prices and an unstable stock market put a downward pressure on auto sales towards the end of the month.

February’s seasonally adjusted annual rate of auto sales (SAAR) amounted to 15.4 million, up from 14.5 million vehicles in February 2012, according to Autodata. However, this turned out to be lower than TrueCar’s 15.7 million forecast.

“New car sales are extremely sensitive to stock market movements,” stated Jesse Toprak, a TrueCar.com analyst, as one of the explanations to why auto sales fell short of TrueCar’s forecast. “The uncertainty in the stock market in the last portion of the month of February certainly did not help.”

Most major vehicle manufacturers had a good month. Ford sold 195,000 vehicles, up 9.3 percent compared with a year ago. Also, its midsize sedan, Fusion, marked a 28 percent increase over the month of February last year, “thanks to strong fuel economy and innovative new technologies,” said Ken Czubay, Ford vice president, U.S. Marketing, Sales and Service in a statement.

G.M., the largest U.S. automaker, announced that the company sold 224,000 vehicles in the month of February, an increase of 7 percent over the same time period last year. On the other hand, Honda reported a 2 percent drop in sales due to heavy winter storms in Northeast region of the country, a strong foothold of the auto manufacturer.

Economists are optimistic about light vehicle sales and expect it to grow consistently with the economy through the year. “There are plusses and minuses here but I think the big picture is that overall economy is continuing to improve,” said O’Sullivan.