In the small village in northern China where Yunping Xu grew up, there used to be a dining ritual serving a family’s most honored guests. A Pig head cut into sushi-sized cubes fried with black fungus and soy sauce was the most anticipated dish, following one dish of chicken and one of fish.

Beloved for their tender texture, pig heads, feet and livers, were once a luxury in China, so expensive that the poor would only eat them at special occasions like weddings and Lunar New Year, recalled Xu. But that changed when China began to reform its economy, increasing domestic production while opening up its market to American pork producers who were eager to find customers for “variety meat” that is hard to sell in the U.S.

“It’s no longer a big deal, and almost everyone can afford them now,” said Xu. She said the once mouthwatering meat like pig feet are so common now that they hardly arouse any desire. In fact, she and her husband are intentionally reducing their intake of red meat for better health. 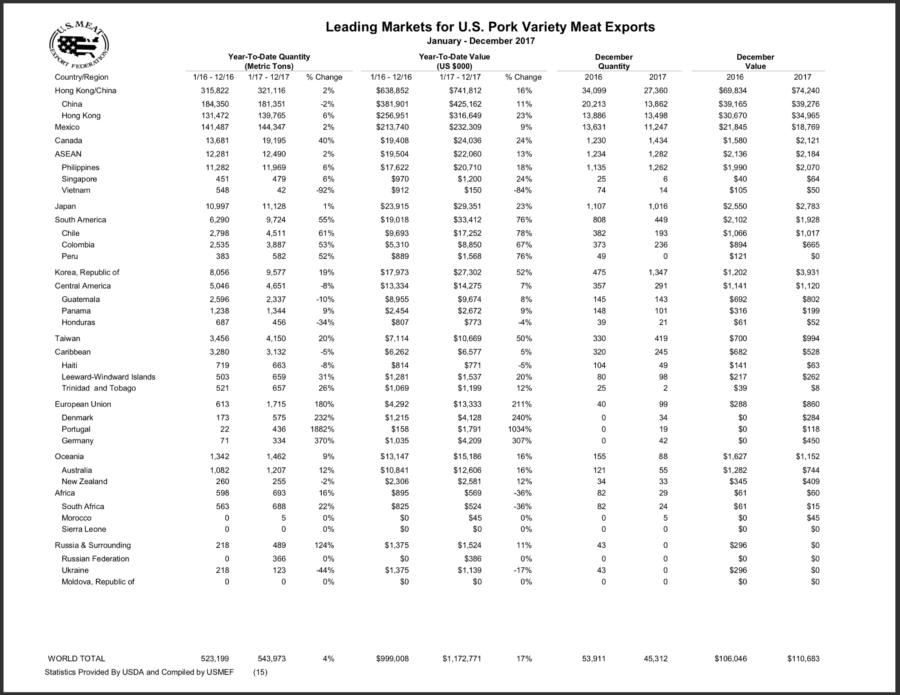 US Pork Variety Meat Exports in 2017

The mutually beneficial trade prompted by different culinary tastes may soon to be disrupted, however. In April, China imposed a 25 percent tariff on imports of U.S. pork variety meat. It was part of a larger package of $3 billion U.S. products that are subject to the China’s retaliatory tariffs, which is in response to the tariffs that President Trump imposed on Chinese exports earlier this year.

For Chinese customers, pig feet cost almost four times as high as regular pork, and the tariffs could result in even higher prices.

In the northern Chinese city Zibo, a pot of pig feet has been simmering for hours on the stove of Lizhen Wang’s kitchen. Wang is making the dish for her pregnant daughter with a special recipe, which she learned from her coworkers in the late 1990s when their wages rose high enough to afford pig feet. The dish is believed to not only improve skin elasticity because of its rich collagen but also boost breast milk.

She said if the price goes up in the future, she won’t buy pig feet unless her children want to eat.

“Although life is better now, people at my age still hold up on the old fashion that we save every bite of good food for the kids not for ourselves,” said Wang.

Mrs. Wang’s pig feet recipe. The dish is believed to not only improve skin elasticity because of its rich collagen but also boost breast milk.

The tariffs were designed to punish American pork producers. But experts cautioned against overstating the impact on the American pork industry. Although China is the largest importer of American pork variety meat, it accounts for less than 25 percent of all U.S. pork exports. By volume the largest export destination is Mexico, and by value it is Japan.

“The Chinese market is very important, but we’ve already diversified our export and don’t entirely rely on the Chinese market,” said Craig Morris , Deputy Administrator from the U.S. Department of Agriculture. The U.S. exported 82 percent of all edible pork variety meat in 2017, and other destination countries including Mexico, Peru, Japan and South Korea.

Even before the tariffs, American pork producers were facing fierce competition from other countries. China’s pork variety meat import in 2016 increased 82.5% from a year early, but Germany and Denmark’s market share respectively surpassed America in 2015, according to soozhu.com, a website specialized on Chinese pork industry.

American pork producers will most likely be unable to raise prices high enough to offset the impact of the tariffs, Morris said. Instead, the tariff will eat into their profit margins. The $6, the residual value of every hog gained by trading with the Chinese, will probably tumble down by 25% to $4.

This isn’t the first time that animal parts have been at the center of a trade dispute between the U.S. and China.

Similar to the pork variety meat trade, American chicken producers had been able to increase the value of their chicken by exporting chicken paws to China, where they are a type of popular snack in China, soy-sauce-flavored in the northern part of the country, spicy in the west, and cooked very differently as a dim sum dish in the south.

In 2011, China imposed stiff tariff, more than 100 percent, on American chicken paws in response to Chinese chicken farmers’ request. Four years later due to the outbreak of highly pathogenic avian influenza, China banned most of American chicken imports and hasn’t lifted the ban since.

Today most of the American chicken paws are grinded to make fertilizer at three to four cents a pound, whereas it used to be exported at one dollar a pound to China, according to James Sumner, President of USA Poultry & Egg Export Council.