Since he opened his flower business 18 years ago, Ashok “AK” Komar has watched storefront after storefront empty from this block of Manhattan.

Pointing through the tall tropical plants for sale to businesses up and down the street, Komar, 41, lists out each flower wholesaler gone dormant. It’s easy to see where they used to be. In their places hotels — a Hyatt, Hilton, Cambria, Fairfield — have risen up like large new stalks.

Some shop owners left when they couldn’t afford the rent, while others who owned their buildings decided to rent them out for more than they could have made selling flowers.

This district of Manhattan has been known for selling flowers since the 1890s. At its peak, hotels, retail florists, and event planners could walk through four avenue-long blocks of stores. But it has been declining for decades. In recent years, the boom in real estate prices has been straining the shops that remain, as landlords have welcomed new tenants who can pay much higher rents.

After generations selling flowers and plants in the same part of town, flower markets from Boston to San Francisco have seen their wholesale business surrounded or outright replaced by residential buildings for professionals and new office space for large businesses.

Part of what brings professionals and large businesses to the city is its history and culture, which long-standing businesses like flower markets have helped create.

“You kind of have this paradox,” said Mike Buhler, the president of San Francisco Heritage, a group that advocates to preserve small businesses and historic buildings. “The very reasons why people want to live here are the ones most at risk because of the rapid influx of money and people.”

When that happens, the cost is more than nostalgia, said Paula Crespo, a planner for the Pratt Center for Community Development in New York. There are also economic consequences, such as the loss of jobs, particularly for people who have immigrated to the US.

“Small businesses have at least half of all the jobs in the private sector, so they’re an important economic engine,” she said. And in New York, she said, “Immigrants have been responsible for a lot of small business development over the last few decades,” leaving them particularly vulnerable to spiking leases.

Flower districts are being pushed out by a familiar force in many cities: rising rents.

Even as rents have decreased for large stores, landlords have been asking retail businesses overall for more and more in rent for the last four years, according to CBRE, the commercial real estate investment firm. In the first quarter of 2018, it said, the average asking price for retail business rent nationwide rose to the highest level in eight years.

In two of the commercial districts surrounding New York’s flower market, CBRE reported last year, rents rose by one-third and two-thirds since 2010. The firm’s data shows that rents have been growing for retail businesses in New York faster than their sales for the last seven years.

In San Francisco, the firm’s data shows the average rent for retail space is the highest in the country — 45 percent higher than New York. As rents have increased in the city, flower shops in San Francisco have gone out of business or had to leave their location for a more affordable arrangement.

“We are seeing less and less brick-and-mortar stores,” said Barbara Schnur, who buys flowers at Brannan Street Wholesale, which has been part of San Francisco Flower Mart for four decades.

Schnur said one of her friends, a florist who is not part of the flower market, has moved to a warehouse space because she can’t afford a storefront. The shops that are losing their storefronts “not because they necessarily had poor business practices,” she said, but because they are not able to take in enough to cover the increasing rent.

The problems are especially acute in San Francisco because of the city’s booming tech economy.

The building housing the San Francisco Flower Mart, second-largest after the market in Los Angeles, was sold in 2014 to a real estate developer, which plans to redevelop the site. The company has guaranteed the flower market will return to the new building in a long-term lease. But in the short-term, the market will have to move to a temporary location while the company replaces the building with a development that includes space for new offices and retail shops as well the flower mart, which will be in its lower level.

Schnur said she is concerned that the new offices and shops — designed for tech businesses and their workers in this former warehouse district — will make it hard for wholesalers to receive shipments.

“We have seen this neighborhood change and grow and through it all we have weathered the storm, but you cannot put us in, you know, underneath a twitter building or a Facebook building and expect,” she said, that it will fit with business that is “gritty, down to Earth, middle of the night, carts flying.” 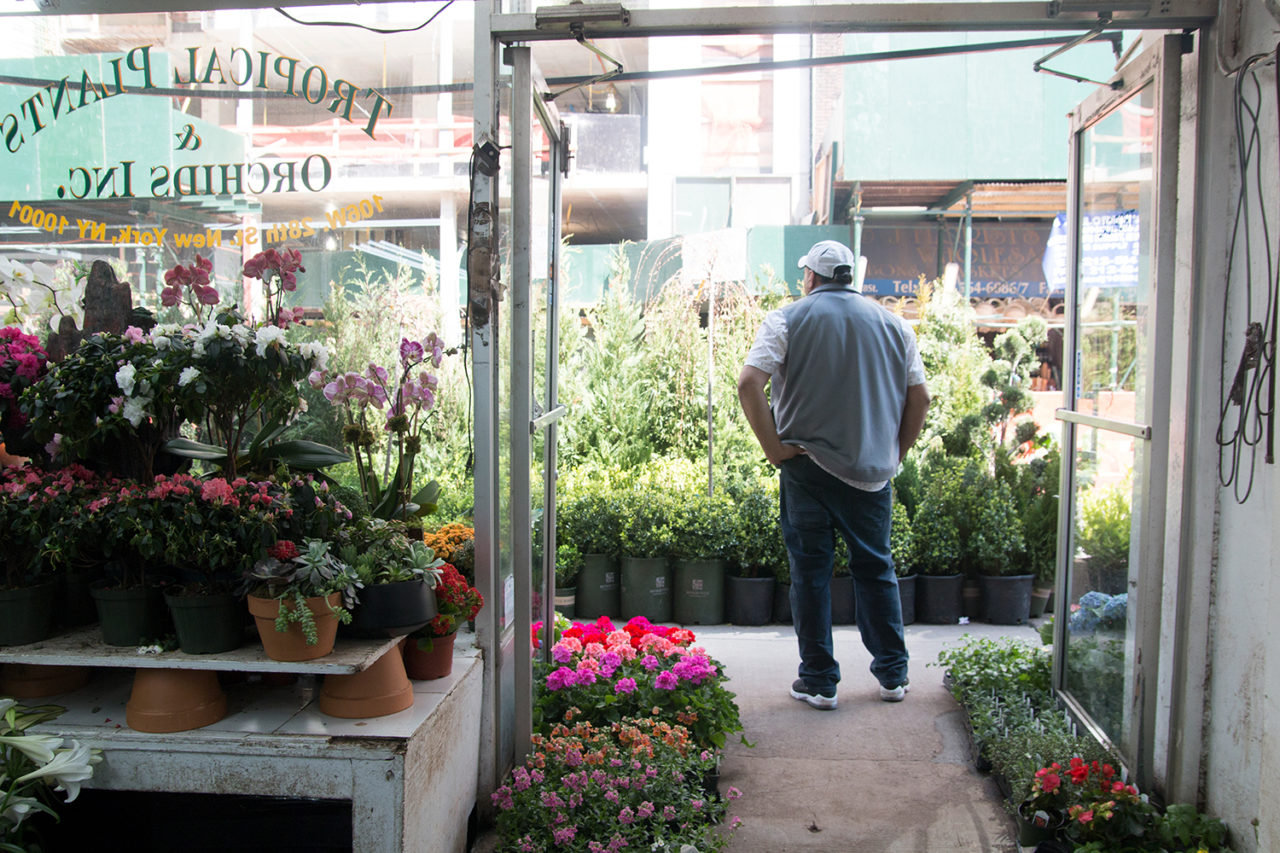 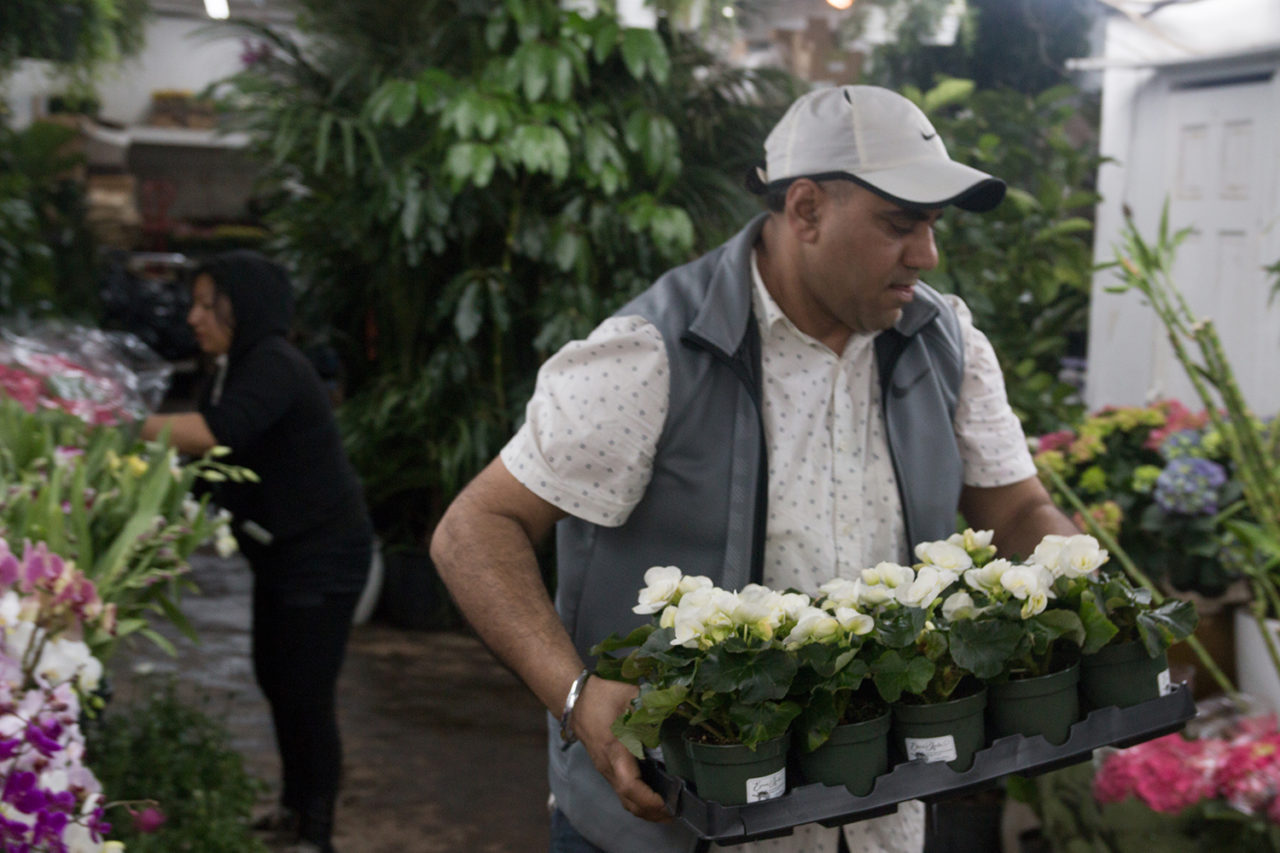 Komar walks with an employee across the street from a hotel that replaced a flower shop in New York City's flower district.

Komar works at the counter of his flower and plant shop in New York City on April 14, 2018.

Komar unloading flowers for his flower and plant shop in New York City on April 15, 2018.

The tech industry may even displace a historic flower market far from Silicon Valley. Wholesalers of the Boston Flower Exchange had been in a building of the same name for nearly a half century when the building (and its name) was sold by shareholders in 2015. In October it was proposed as one of the sites for Amazon’s second headquarters if Boston wins the bid.

Meanwhile, most of the flower vendors moved in 2017 to their new location in the suburb of Chelsea. It is out of the way for some customers, and its businesses have to pay more in rent after renovating the facility. But Janina Cupp, who manages the flower exchange, said in an email that she appreciates being near other wholesalers, like the New England Produce Market, and that the city of Chelsea has been improving its infrastructure and attracting new businesses.

Another challenge for flower districts has been the shift to online sales. But some customers, especially florists and designers, rely on shopping in person.

To Nic Faitos, buying online can’t replace the flower market. His own store, Starbright Floral Design, is next to the flower district, and he goes to other shops every day to grab flowers that he doesn’t have in stock for his own store.

“The purpose of the market has changed dramatically,” he said, but “the very very good sharp operators in the market” have been able to adapt. Faitos, 60, expects flower shops to keep closing as rents grow higher.

Flower businesses that own their own spaces have been protected, but even they are facing pressure. Bill’s Flower Market in New York is in its fourth generation of family ownership, said Michael Nikolis. Nikolis, 43, runs the shop opened by his great-grandfather more than eight decades ago.

One reason it remains open is that they are their own landlord, said Nikolis. Had they not owned their own building, the landlord would have had several opportunities to sell it to the highest bidder, or to raise the rent to an unaffordable level once their lease was up.

Nikolis said they receive multiple inquiries a week about selling the property, and have been for the last two decades. Adding to the pressure, Nikolis said the business’ real estate taxes went up around 15 to 20 percent last year.

In the meantime, Nikolis said their business, which sells wholesale and retail, has set itself up to help customers who are trying to save money on flower arrangements by doing it themselves.