The Bureau of Economic Analysis will release the Personal Income and Outlays indicator for March on Monday morning. Economists are expecting modest wage growth and spending, but remaining hopeful that consumption will soon pick up. Over the last six months, disposable income has risen, while consumption has lagged following hurricane recovery. Here are five things to look for.

Despite a very low unemployment rate, holding steady at 4.1 percent for the past 6 months, wage growth has been slow. Economists expect this to continue in the personal income report for March.

“I don’t think the labor market is really that tight,” said Michael R. Englund, Chief Economist at Action Economics, LLC, as an explanation for the lagging wage growth. He estimated there were between 6 million and 8 million “prime age” workers missing from the labor force, defined as those between the ages of 25 and 54 who would otherwise be working or looking for work. Because jobless workers are only counted in the labor force if they are actively seeking work, these unemployed people would not be included in the official unemployment rate.

Economists expect savings to be up again in March, with income outpacing spending by a significant margin. Last month’s personal income and outlays report showed household saving at 3.4 percent, a 6-month high after months of very low saving.

Part of the reason the spending numbers look so weak is because of the hurricanes which hit the Gulf Coast at the end of last year, according to Robert Brusca, president of Fact & Opinion Economics. As people rushed to replace cars and homes damaged in the hurricanes, spending spiked, and the resulting drop has artificially deflated the numbers, Brusca said.

However, it is still unusual for income to outpace spending by such a margin. Brusca expects the gap to continue, since many Americans have a saving deficit, and will likely be using the money from the recent tax cuts to save for retirement.

The tax cuts should continue to make an appearance in March, resulting in higher numbers for disposable income. The Bureau of Economic Analysis has estimated a significant reduction in taxed and untaxed payments due to the tax cuts, which will be reflected in Monday’s report.

Englund pointed to the tax receipts from April, not yet included in the BEA’s estimates, which indicate that the payments could be even lower than predicted. This would mean an even higher number for disposable income, since paying less in taxes would leave households with more money to save or spend.

The higher number for disposable income is one reason some economists say they may be surprised by a rise in consumption in Monday’s report. Last month’s report showed personal income rising 0.4 percent for the third straight month, with consumption lagging at 0.2 percent.

Analysts say that such a gap between income and spending — particularly one in which income outpaces spending —  is rare in the long-term. Even if the report for March shows weak consumption numbers, spending will likely pick up again for April and May, according to Englund. 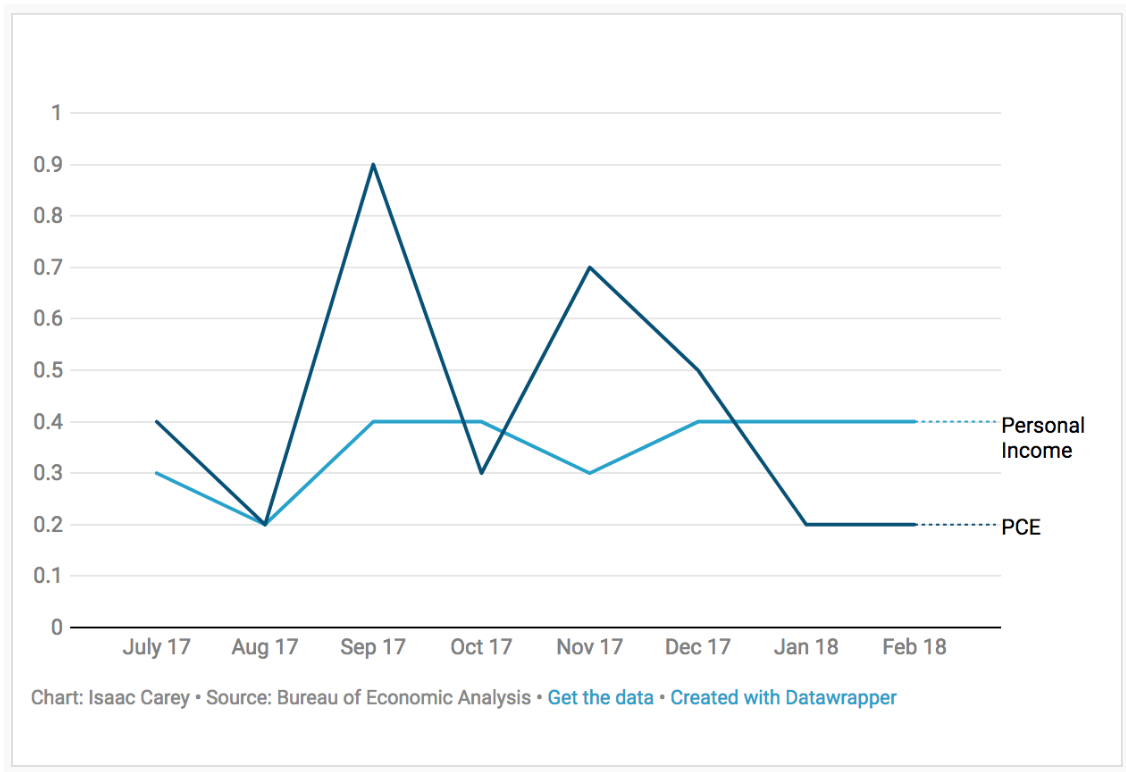 Inflation may hit the Fed’s 2 percent target in March, or at least get very close to it. This would be the first time inflation hit the target since it was first set in 2012. The Consumer Price Index, which measures changes in price, is the Fed’s preferred method for tracking inflation. Prices have been steadily rising, and last month’s report showed CPI at 1.8 percent.