Personal income increased in January, as employer optimism surrounding the recent tax bill made its way to consumers’ wallets.

The 0.4% increase in January released Thursday by the Bureau of Economic Analysis exceeded analyst expectations. Disposable personal income, or the money households make after taxes, showed a more dramatic rise at 0.9 percent, about two times the norm.

The sharp rise in disposable income is likely in part due to one-time bonus payments which businesses announced in December, but paid in January. While some analysts expected to see a rise in consumer spending to accompany the rise in income, consumer spending instead dropped slightly after a very strong fourth quarter. However, the financial stimulus from the recent Tax Cuts and Jobs Act (TCJA) should ensure steady growth in spending in the coming months.

Meanwhile, personal savings increased to 3.2 percent from a 10-year low of 2.5 percent in December 2017, the lowest since the start of the recession in 2007. Despite the rise in personal income and the drop in consumer spending, the savings rate is still low, and analysts expect spending to pick up again in the coming months.

“We think as the year goes on, the tax plan and other fiscal stimulus will keep consumption solid and the economy growing,” said Michael Gapen, chief economist at Barclays Capital Inc.

Considering the impact of the bonus payments on the rise in income, it is unclear how much wages have actually increased. Figures from the Labor Department for January show the largest annual rise in wages in almost a decade. However, there is little evidence yet that this will be sustained.

The hurricanes in August and September of last year also had an impact on the fourth quarter, explained Mark Avallone, financial advisor at Potomac Wealth Advisors, LLC. Much of the slow-down in consumer spending is due to the sharp rise and drop in auto sales, as consumers replaced cars that had been destroyed in the storms.

Expectations that the Fed may add a fourth interest rate hike to the three originally forecast continue, as increased wages and prices hint towards rising inflation. The Consumer Price Index – or the measure of the monthly changes in price – which is the Fed’s preferred method of tracking inflation, rose to 1.7 percent.

However, this is still lower than the 2 percent target set by the central bank. Inflation has missed this target since it was first set in 2012, but policy makers expect it to eventually catch up.

“The inflation outlook is somewhat murky,” said Ward McCarthy, Chief Financial Economist at Jeffries & Company, pointing to a recent slow-down in the inflation rate after two years of acceleration, but adding that it should soon pick up again.

Analysts cited the steady rate of low unemployment, which should spur wage growth as employers compete for a shrinking labor force. Additionally, as the $1.5 trillion tax cut package increasingly has an effect on consumers’ wallets, and the government increases spending, analysts expect rising inflation to follow. 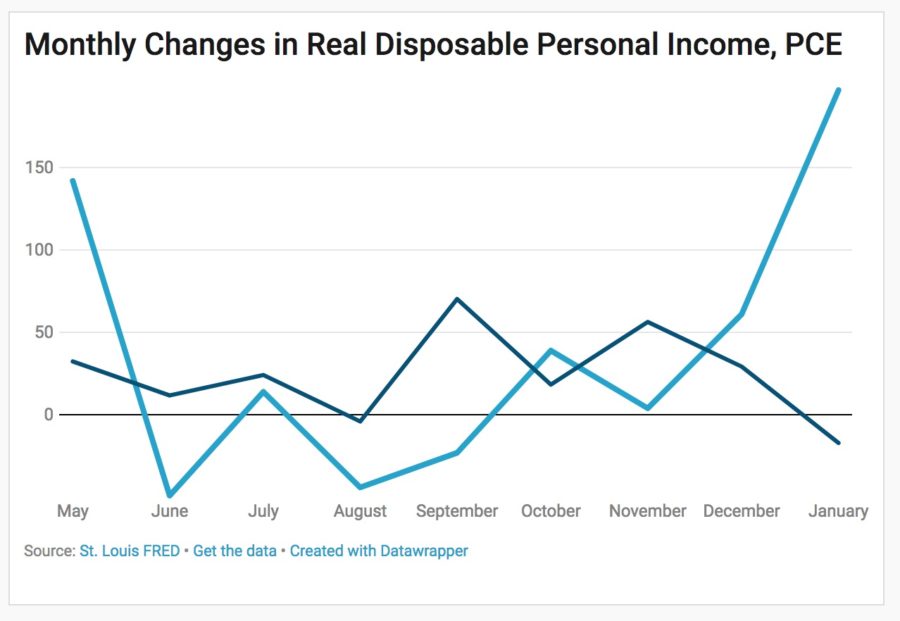