If December home prices were higher than expected, January numbers are shaping up to be even stronger.

There are several reasons to anticipate strong growth in January home prices. The first is momentum, and there’s been a lot of positive momentum in the housing market. Other housing indicators like home sales and housing starts have already been released for January, and they were all encouraging. All of the home sales indicators – existing, new and pending – saw increases in January. There was also an increase in housing starts. This can only bode well for home prices. 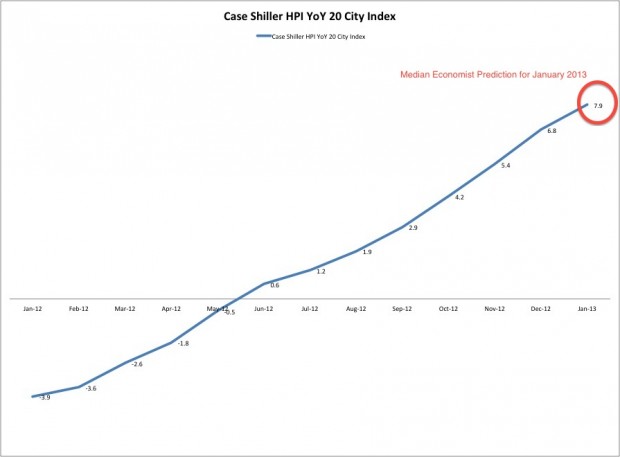 Robert Denk, Senior Economist for the National Association of Homebuilders compares the housing market activity to a bouncing ball – home prices hit the “ground” in 2008. The impressive growth we saw at the end of 2012 and will inevitably see in early 2013 is from the momentum of “that ball flying up again.”

The other reason to predict a strong increase in home prices relates to the law supply and demand.

“The bottom line is there is still a very limited supply of inventory of new and existing homes and that’s helping to support prices,” said John Herrmann, an economist with his own forecasting firm.

Fewer and fewer foreclosed homes are being sold at auction, and it’s contributing to the decline in inventory. Homes sold at auction put downward pressure on home prices since they sell for prices that are significantly below market value. Herrmann points to an increase in short sales as a sign that banks have increased confidence in the economy and the upward direction of the housing market. A short sale happens when banks accept less money than is owed on the mortgage.

And there’s an increase in demand. The upswing of the market has bolstered buyer confidence, and people are looking to buy.  There has been an uptake in cash sales, which says two things about the market.  First, cash sales are usually made by real estate investors.

“If investors think it’s a good time to buy with all cash it means they feel comfortable about the market and they they expect the prices to go higher in the coming months,” said Brian Jones, a Senior Economist at Societe Generale.

“If you have cash hanging around there’s no better time to buy.”

Second, when traditional buyers who are planning to reside in the home use cash, it shows the wounds caused by the housing crisis have not quite healed.

“That potential homeowners have built up the cash reserves and would bypass taking out a mortgage suggests that homeowners are cautious,” said Herrmann.

Nevertheless, cash purchases are good for the housing market in the long term because they limit volatility and promote stability.

And stability is what economists foresee for late 2013 through 2014, when they believe home prices find a healthy growth pace of 3.5 to 4 percent — the same rate as personal income.

“We expect it to slow down and begin to rise at a more sustainable rate.”