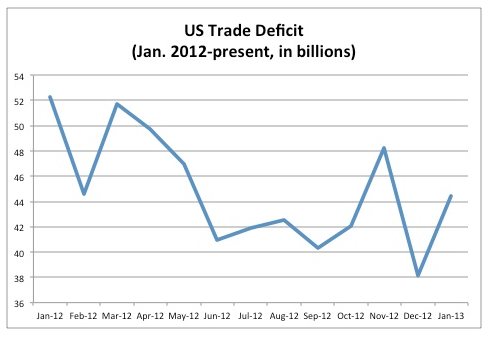 The U.S. trade deficit widened in January, reflecting an increase in demand for imported oil.

The trade gap widen to $44.45 billion, a 16.5 percent increase from the previous month, according to the Commerce Department. Analysts expected a trade deficit of about $42.6 billion for January. The petroleum balance rose almost 31 percent from December.

“That was a positive indication for the economy,” said Tim Duy, an economics professor at the University of Oregon — a sign that the American economy is growing and increasing demand for oil.

The deficit also grew because a boost in consumer spending brought in more imports, which outpaced exports.

“We import a ton of oil, which is a big part of the deficit,” said Adam Hersh, an economist at the Center for American Progress, a liberal think tank. “Exports aren’t growing as fast as imports. That’s especially true with China.”

The Commerce Department registered a 1.2 percent decline in exports and a rise of 1.8 percent in imports.  The trade deficit with China rose 13.6 percent from December to $27.8 billion in January. Some analysts say U.S. imports could have been higher if it weren’t for the Chinese New Year.

“The Chinese New Year always affects trade because a lot of factories shut down in China,” said Dean Baker, an economist who is co-director of the Center for Economic and Policy Research. “This often is a factor. It is something to keep in mind.”

The widening of the U.S. trade deficit may reduce the first-quarter gross domestic. Imports are not expected to collapse as long as the U.S. continues on its slow economic recovery.

The exports slowdown, combined with a falling dollar, could mean that the United States is losing ground in its competitiveness or that we’re seeing the effects of the recession in Europe and the economic slowdown in China and other countries like Brazil and Japan. [m1] Some analysts believe China keeps the value of its currency low so that its exports are cheaper. The U.S. dollar remains lower against the euro with EUR/USD trading at 1.3047.

The trade deficit has narrowed over the last year but may increase if the U.S economy keeps recovering.

“If the global economy continues to stagnate and the U.S. economy stays relatively better than the rest of the world, then I think we’ll get an increase in the trade deficit,” said Duy.

On Wall Street, the economy shows signs of recovery with the Dow Jones on a record run as well as very encouraging job gains. But if exports decline and  the GDP also declines because of the widening trade deficit, trade in capital and goods can take a hit and consumers may show lack of confidence.

“Trade balances are going to become more volatile in the next few months and in the next quarters,” said Joseph Greco, managing director at Meridian Equity Partners. “But with the stock market robust and at new highs, there is domestic optimism in the United States.” 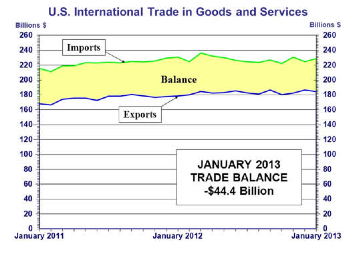