Personal income plummeted by the largest margin in 20 years in January, but the decline constitutes a temporary adjustment rather than a long-term trend.

The 3.6 percent plunge, measuring $505.5 billion, reflects the severest drop since January 1993, the Commerce Department reported Friday, and a sharp contrast to the 2.6 percent increase recorded the previous month.

Despite the dramatic change, “The numbers in January shouldn’t be taken that seriously,” said Hugh Johnson, chairman and CIO of Hugh Johnson Advisors. “You really have to take an average of December and January to see what’s going on.”

Part of the January decline resulted from the expiration of the payroll tax holiday, which raised Social Security taxes from 4.2 to 6.2 percent.

Other factors were increases in income taxes on the upper bracket and on taxes on dividends. Individuals making over $400,000 and couples over $450,000 per year saw their rates spike from 35 to 39.6 percent, while dividend taxes rose from 15 to 20 percent.

Efforts to stay ahead of these last two changes led to the impressive numbers the month prior as companies issued early dividends and bonuses in December, before the tax hikes took effect January 1.

This contributed to a savings rate of 6.4 percent that month. In January, savings declined to 2.4 percent, the lowest level since November 2007, as people adjusted to the drop in personal income.

Setting aside the statistical noise from the tax increases and the December rush to avoid them, personal income rose by 0.3 percent in both December and January according to the Commerce Department. So even though the permanent payroll tax increase will constitute an ongoing drag on personal income, the overall trend is up, albeit at a slow pace.

“We expect that to continue going forward,” said Ellen Zentner, a senior US economist at Nomura Securities International, Inc.

While economists warn not to make too much of the January figures, there are concerns about the $85 billion in mandatory cuts to the federal budget that are slated to commence March 1.

Should a deal not be reached, “The sequester will have a much bigger impact on consumer spending and personal income,” Johnson cautioned. This perspective is not universal, however, as many suspect either that a compromise will worked out or that the effect of the cuts will not be as uniformly negative as he suggests, varying from region to region, depending on their dependence on federal spending.

Another worry is how the payroll tax cut will influence consumer spending, which rose only 0.2 percent in January, a weak jump the Commerce Department attributed to higher energy prices as spending on durable goods fell.

“Essentially households are having to absorb a higher tax burden. And that’s the dynamic we’re seeing play out,” said Zentner, noting that this adjustment falls heavily on those with lower incomes and the businesses they rely on. “I see it as a resetting. Households have to reset to a new reality.”

Though this “resetting” will continue in the months ahead, once households have adjusted, consumer spending should return to a slow upward climb. 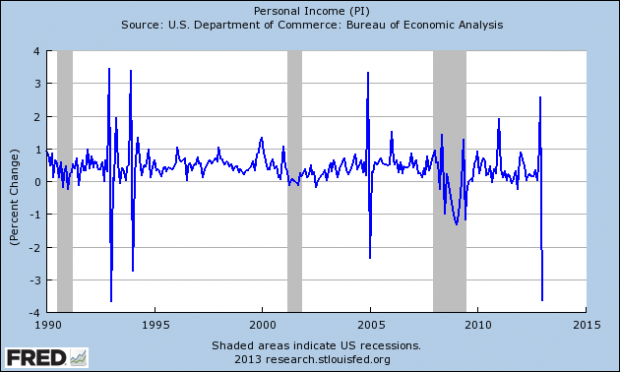