While Airbus made headlines at the end of last year–marking its biggest ever share of the global market with more than 1400 orders–a recent EU emission trading scheme has halted the European aircraft manufacturer’s momentum as China and India froze more than $14 billion orders this month.

In an effort to curb carbon dioxide emission and combat global warming so to meet its obligation to reduce emissions by 20 percent by 2020, the European Union has imposed a tax under which airlines that exceed tight emission limits must buy carbon credits. In what they call “a violation of international law,” China and India have frozen more than 55 jet orders, saying the bloc cannot impose taxes on flights outsides its own airspace. Russia and the United States have also objected to the scheme.

“We ask the European Union to take into account the global position of almost every country outside of Europe against this scheme,” said Louis Gallois CEO of EADS. “We are worried that this conflict is becoming a commercial war.

As a result, the head of Airbus said up to 2,000 jobs are now at risk and expects the company to loose more than 50 percent of its momentum this year.

Meanwhile, after failing to take off last year because of a late decision on a successor to its 737 aircraft, Boeing surpassed Airbus in orders over the first two months of 2012, and is rapidly catching up to its European rival — scoring a total of 385 commercial airplanes in January and February. That compares to 97 for Airbus. 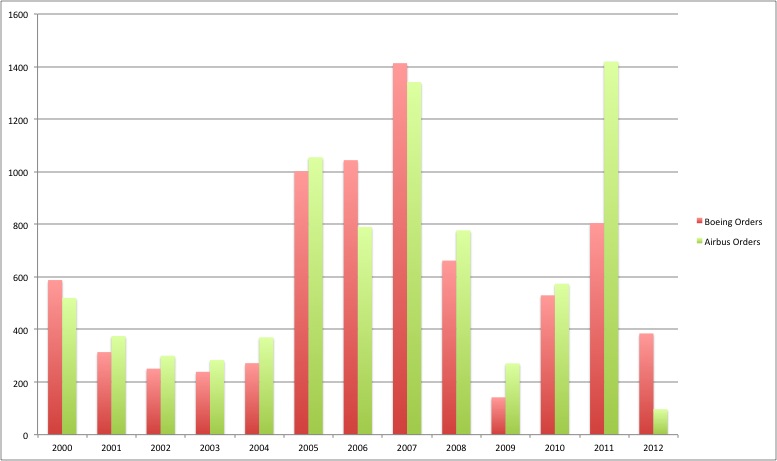 The international community’s search for more fuel-efficient engines has been a driving factor towards Airbus’ win in 2011 and Boeing’s sales so far this year.

The introduction of the A320neo—which claimed that it was 7 percent more fuel-efficient than Boeing’s 737—was a factor in Airbus selling 244 of them last year. Boeing’s counter response with the introduction of the 737 Max holds a 17 percent fuel burn advantage over the A320neo – or a 12 percent improvement from its previous 737. Last month, it closed a $22.4 billion order with Indonesian carrier Lion Air for 230 of its 737 Max jets – its largest ever-commercial jet aircraft order.

Moreover, in the market for larger wide-body planes, Boeing’s 787 Dreamliner – also meant to cut fuel costs by 20 percent – has been ordered by 60 customers around the world who bought 873 planes in total, making it the fastest-selling wide-body airplane in history. And Boeing’s latest 777 has no true competitor until Airbus introduces A350 in 2015.

“I’ve got to give them credit on the 777, if you need lift in the long-range wide-body market now, that’s the plane,” said John Leahy, Airbus COO in a conference last month.

So with Airbus currently facing a real threat to its 2012 aircraft orders because of the bloc’s emission trading scheme and its lack of fuel-efficient competitor to Boeing’s latest engines, the Chinese have shifted their attention to the American manufacturer.

Boeing has landed 30 new orders this year for its 777-wide-body jets – a sale worth nearly $9 billion.

It has also begun collaborating with Comac – China’s aerospace manufacturer to create an aviation energy center in Beijing.

“The Chinese want to be in the aerospace business and they’ll get there in the next two decades,” said George Ferguson, Senior Analyst in Aerospace & Airlines at Bloomberg.

Analysts have said that the recent partnership was part of Boeing’s effort to ensure leading sales position in the Chinese market. Estimates show commercial aircraft sales will more than triple over the next 20 years and could be worth over $600 billion.

Even Airbus Chief Operating Officer John Leahy admitted in a conference last month, “Boeing is poised to outpace Airbus in orders this year.”

However, recent inaction on behalf of Ex-Im Bank — the U.S.’s export credit agency (ECA) that provides loan guarantees to financial institutions so they can finance sales for U.S. companies — to raise the $100 billion lending cap before its expiration May 31st could end up threatening overseas sales — making it more expensive for emerging-market airlines to buy Boeing planes.

And even as the debt crisis is breathing upon Europe, COFACE – France’s export credit agency—secured more than $350 million as a credit wrap to Airbus in 2011. This means that close to 30 percent of Airbus deliveries benefited from this support, virtually making the financing of planes not an issue for EADS.

The demand for ECA guarantees may continue to increase this year as the request for new aircrafts is soaring with both Airbus and Boeing planning to increase production this year.

“The big challenge this year is going to be the increase of production orders for both Airbus and Boeing,” said Alex Hamilton, analyst at Early Bird Capital. “Boeing is planning to build 13 787 per month. It will be a year where we’re going to have to execute.”

Given that US ECA raises its lending cap this year, Boeing is ready to take off, leaving Airbus stalling behind.