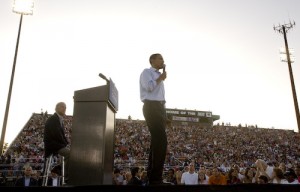 What if Democrats and Republicans could come together to present as united a front on solving the country’s economic problems as they have, for all intents and purposes, on foreign policy?

If you recall, when Barack Obama defeated Republican John McCain for the presidency back in 2008, one of the biggest contentions of the right was that the young Illinois senator was not fit to be commander-in-chief. Indeed, many conservatives seized upon then New York senator Hilary Clinton’s suggestion, in a controversial ad that ran during the democratic primarily, that Obama was far too inexperienced to be the face of America’s military might and diplomacy as the U.S. dealt with unyielding terrorist groups like Al Qaeda.

Yet close to three years into Obama’s term and the success of his foreign policy agenda is hard to deny.  What’s more, Republicans have displayed an uncanny knack for basking in the glow of Obama’s foreign policy triumphs while being careful not to give the president himself all that much credit.

So emboldened by the death of Libya’s Muammar Qaddafi last week was McCain that he, with a smile on his face, used the milestone to send a shot across the bow of other “dictators” all over the world in an interview with the BBC.

“I think dictators all over the world, including Bashar al-Assad, maybe even Mr. Putin, maybe some Chinese, maybe all of them, may be a little bit more nervous,” McCain said, later adding, “It’s the spring, not just the Arab spring.”

McCain is just one of a slew of Republicans who has been critical of Obama’s foreign policy while at the same time being all too willing to revel in a spate of triumphs that have also included the assassination of Al-Qaeda leader Osama bin Laden.  And although generally critical of Obama’s handling of Libya and other efforts—with Republican presidential nominee in March calling the president’s handling of Libya “tentative, indecisive, timid and nuanced”—conservatives have primarily stayed out of his way, largely because he wields a certain degree of unchecked power as commander-in-chief but also because they have, by and large, supported the overall thrust of his agenda: to spread democracy to countries once thought to be strongholds of Muslim extremism and safe havens for terrorists like bin Laden.

The question this leaves me with is this: How much further along on the path to putting countless Americans back to work might we be if Republicans exhibited similar support of the president in his efforts to solve the nation’s current economic woes?

“Look at the progress the president can make when he doesn’t have Republicans obstructing him,” former Democratic spokeswoman Karen Finney told the AP recently.

Despite a survey of economists by Bloomberg concluding that passage of the president’s American Jobs Act would prevent another recession in 2012, Republicans remain staunchly opposed.  Even the wishes of the American people appear to be falling on deaf ears on Capital Hill.  According to a Gallop poll last month, a majority of Americans favor a bulk of the policy prescriptions in Obama’s plan.

Still, the right is apparently unwillingly to concede on any proposal that might give Obama even a modicum of political traction heading into next November’s elections.  While Republicans say they’re subject to the will of their constituents and not to the self-serving machinations of conservative mouth pieces like Glenn Beck and Rush Limbaugh—who famously said he hoped that Obama “failed”—their recent stonewall on Obama’s jobs plan make it almost impossible to take that assertion seriously.

It’s unclear whether conservatives will ever unshackle Obama’s hands on the economy and let him take the lead domestically as he’s done overseas, but there’s no denying that the success of the president’s foreign policy efforts makes the thought an interesting one to ponder—if only in our dreams.